Selling the medium: a brief history of the BBC’s commercial arm

The recent attention given to the various troubles associated with the Murdoch media empire, not to mention anxieties about the continued expansion of new media giants like Facebook and Google has had the effect, perhaps, of slightly occluding the workings of more traditional state-funded national broadcasters, whose power in part accrues from their proximity (even at the length of a long arm) to the body of the nation state, an entity whose ability to influence dwarfs that of even the most powerful multinational media conglomerate.  The BBC in the UK and the ABC in Australia, both of which are already subject to some form of statutory regulation can only benefit from the augmentation of state regulatory powers that is likely outcome of the various media inquiries under way or recently completed(Levinson in the UK, Finklestein in Australia). But holding on to a valid distinction between public virtue and commercial evil seems neither currently or historically plausible. In this respect I am particularly fascinated in the relationship between politics (or ideology) and aesthetics (or textuality) in media production, especially television, because it illuminates some of the central assumptions about how we consume, experience and value cultural production.

For this reason over the past eight years or so I have been researching the history of the BBC’s commercial activities, work which more recently has been funded by the Australian Research Council under the project title: ‘Worldwide: the history of the commercial arm of the BBC.’ This research aims to excavate a more nuanced sense of the relationship between media production and commerce than the current Manichean figuring of PSB good/commercial bad has tended to allow. In particular I want to see the extent to which the BBC’s attempts over time to sell their product – television shows, radio transcriptions, publications, events, merchandise etc – can tell us about the institutional and political conception of the ‘mediumness’ of the various mediums in which they were engaged.

The BBC of course began as a commercial Company in 1922 until it was granted its current status as a public Corporation in 1927, but it always retained a commercial element somewhere in its corporate metabolism (such as the listings magazine the Radio Times). It also traded on its close relationship with the Foreign Office in order to nurture markets across the Empire both pre- and post-WW2. But it was not until the post-war period that the BBC began to think more seriously about selling its product overseas in the emerging global market. That market was mainly in television, and future DG Hugh Carleton Greene spent a lot of the 1950s trying to devise ways to figure out how to sell BBC television abroad: he was hampered by the creative union restrictions on recording and selling material containing music and/or actors which meant that BBC sales staff were reduced to pitching documentaries about Cornish arts and crafts and episodes of Andy Pandy from their New York offices.  And the institutional complexity not to mention the personal jealousies at the BBC meant that Greene’s work was largely concealed from the Television division. Furthermore the government was reluctant to provide the extra grant-in-aid money needed to promote this initiative since the licence fee income was strictly ring-fenced for the purposes of national production and consumption. That meant the success of overseas sales of BBC product depended on indigenous product having universal appeal.  It was only after the Suez crisis in 1957 that the British government saw the value of financing overseas distribution of BBC material (the ITV companies had, in the view of the BBC already degraded the overseas market for British television product).

The most interesting BBC figure who pushed for an enlargement of commercial activities during this period was Ronald Waldman, Head of Light Entertainment. By the early 1950s Waldman had made two extended visits to US television networks and studios and each time on his return reported on what he judged (to the incredulity of BBC technical and production staff) to be the advanced quality of US production over BBC faire in every genre. For Waldman the reason for this lay in the entrepreneurial spirit that was inspired by intense commercial competition. Long after Greene had moved on to develop aspects of BBC journalism Waldman (along with Gerald Beadle) continued to push for an opportunity to develop an entrepreneurial commercial division that could exploit BBC talent in the international television export market. By the end of the 1950s he had secured a co-production agreement with an American distributor to make a series version of The Third Man, the BBC’s first true commercial television venture made from the ground up (and, bizarrely, a co-production that was literally shot half and half in the US and UK).

By the 1960s the easing of creative union restrictions allowed the BBC to open up a catalogue of programmes for international sale; Television Enterprises was set up in 1960 and run by Waldman; a decade later, after merging with its radio equivalent,  it was selling sixteen thousand items a year. During the 1970s BBC Enterprises was mainly concerned with selling programme packages  (Civilisation, Elizabeth R, Dad’s Army)  abroad under the stewardship of former outside broadcast manager Peter Dimmock, but it also ran outfits such as the Dr Who exhibition at Longleat stately home and the distribution of audio recordings of television shows such as Fawlty Towers. Dimmock saw Enterprises as a supplier of quality product to commercial broadcasting sectors afraid of state regulation or takeover (as in Latin America at that time). At the same time the BBC was in a long term co-production and distribution agreement with Time-Life, who distributed BBC product in the Americas. In 1979 it secured government approval for the establishment of a wholly owned commercial subsidiary, and by the mid-1980s BBC Enterprises was flourishing on the crest of the widespread take-up of home VCRs; it also sold the BBC Micro computer and used its teletext feed to supply business data to stock exchange.  Its rapid growth in the late 1980s and early 90s culminated in the 1994 White Paper ‘The Future of the BBC: Serving the Nation, Competing Worldwide’ that both encouraged the BBC to pursue global expansion through its commercial activities and gave restructured Enterprises the name we know today.

One version of this history might examine the role of BBC Enterprises/Worldwide in the spreading or infection of a corporate commercial culture, encouraged by John Birt and his friends at McKinsey, across all sectors of the corporation. I explore the validity of this idea in a forthcoming paper, ‘From public-private virtue to corporate-cultural amoeba:  Mr Blobby and the rise of BBC Worldwide during the 1990s’ at the Transformations in Broadcasting Conference in Leeds later this year. 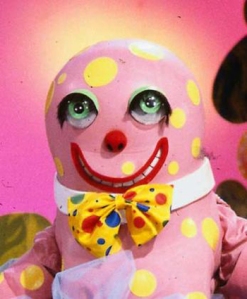 What interests me now though is the way that The Third Man exemplified a continuing aspect of BBC commercial operations, bringing together institutional, commercial and aesthetic aspects. For Greene and Waldman the problem in selling British television abroad was always that it was initially designed and funded for national licence fee payers. The trick was to find a way of funding and incorporating product that could credibly be seen as both national and yet had international appeal.  What they did was to internalise their aspirations for the commodity as an aspect of the programme istelf.  The Harry Lime of The Third Man television series, unlike the Orson Welles/Carol Reed version, is an international jet-setting rogue who helps the weak and muddled defeat the mendacious and criminal; as played by British born but mid-Atlantic-accented Michael Rennie, he is a glamorous but somewhat unspectacular figure, his chief qualities being that he is known everywhere, and able to adapt to situations with a cunning fluency.  Sadly the commodity itself did not acquire the same success as the character, but we can see the industrial intentionality at work.

Is this not in some part an aspect in the success of more recent BBC content internationally? Think of the attributes of mobility, adaptability and hospitality to universal take-up exemplified by, say, Dr Who or Teletubbies, or Top Gear. As I argued in my first blog for CST Online, it is clear that the major recent success of the British in the global television market has been through format sales – where the content is precisely opened as a vacancy for local material. That the BBC persisted for so long in its pursuit of international success by trying to conceive of adaptable content may not have been the best long-term commercial strategy. But it has produced an extraordinary set of cultural products which testify to the strange but compelling ways in which aesthetic, narrative and stylistic features interact with political, commercial and institutional imperatives.