Inner and outer in Homeland

Steven Peacock’s recent observation that many academic analyses of television too often become ‘systematic, determined to “solve” the text’s engagement with a specific subject’ is a timely reminder that our evaluation of television art would do well to avoid treating it like a puzzle. It is true that a lot of contemporary television fiction is complex but we should not conflate that which is cognitively challenging with aesthetic achievement: and while puzzles do have aesthetic dimensions we generally (with a few exceptions) do not take them to be works of art. Tracking the formal patterning of dense layers of plot, ambiguous character motivation, and generic innovation might sound like the work of evaluation but it doesn’t add up to a hill of beans if the object under scrutiny is little more than pretty Sudoku-TV.

These thoughts found their anchor when I encountered Showtime’s recent political psychodrama Homeland for the first time earlier this week. Its title sequence references the puzzle form by depicting its two central characters, CIA agent Carrie Mathisen (Claire Danes) and US Marine Nicholas Brody (Damian Lewis) in a maze, and the plot has a prominent central enigma that undergoes a series of clever shadings, reversals and surprises as the narrative develops – the sort of thing we have become accustomed to in quality American dramas of this kind.

Ten years ago in Iraq Carrie was warned that an American POW had been turned by Al-Qaeda; when Brody is rescued by special forces after years of captivity in a terrorist compound, and exploited by the US authorities as a war hero, she instead immediately suspects that he is the ‘turned’ soldier. Predictably she is unable to convince her boss that her suspicions have any grounds, but she places Brody and his family under surveillance. In a further turn we discover that Carrie has been taking anti-psychotic medication for several years thus putting her own suspicions under suspicion.

Homeland’s early episodes alternate between slices of Brody’s difficult adjustment to coming home – facing intense media scrutiny, dealing with his two children, and his wife Jessica (Morena Baccarin) who has been having an affair with one of his marine comrades – and Carrie’s attempts to build up evidence that would substantiate her conviction that he is a terrorist. A lot of the time this involves us watching her watching Brody and his family at home via the many black and white surveillance cameras hidden there. I was struck by how similar Carrie’s intense scrutiny of Brody’s words, gestures and movements was to my own practice of studying television – sitting up close to a big screen, notebook nearby, pen in hand, rapt, honing in on the slightest details – dare I say clues? – in order to assess a performance. 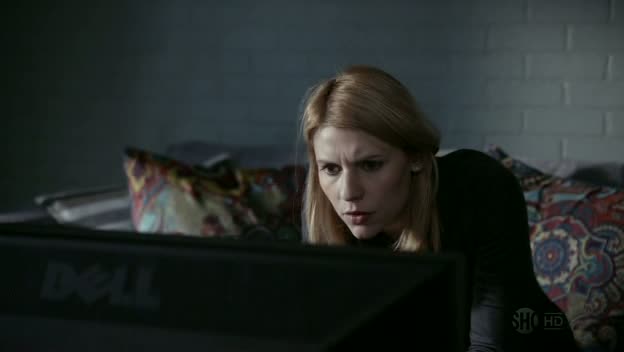 The most spectacular version of her close reading comes at the end of the first episode when she discovers – by her lights at least – that Brody’s apparent nervous hand movements at his televised homecoming ceremony are instead a means of sending a coded message to his Al-Qaeda comrades in the US.

The moral dimension of Carrie’s scrutiny of the Brodys’ private lives (which she describes at one point to her helper, the aptly named Virgil, as a ‘reality show’) is brought home in a scene which echoes the famous homecoming moment in Peckinpah’s The Getaway, when Brody and Jessica have sex for the first time since his release. According to one of the show’s creators Alex Gansa:

“We tried to put Carrie in the most awkward, uncomfortable position we could put her in. That puts the audience in the same position: You are violating someone’s privacy. Without being doctrinaire, we’re really trying to show what it means to watch somebody all the time. What are you learning, and are you learning anything that’s relevant?”
[Hamed Aleaziz, ‘Interrogating the Creators of Homeland’, Mother Jones, 4 November 2011]

Or as Carrie shouts at Virgil – and us – after he discovers her anti-psychotic medication, ‘What are you saying? That I’m making this shit up? Well, maybe I am – you know maybe it is all in my head but you’re in it now Virgil – up to your fucking neck.’ Danes does an extraordinary job here and elsewhere of depicting an agent driven by her desire ‘not to let it happen again’ which, the show hints is in some way caught up in her pathology that makes us in turn doubt not only the means she uses but her perceptual reliability itself. For she is facing the problem of matching up ‘inner’ and ‘outer’ – that is human subjectivity and its embodied expression – where the stakes of getting it right or wrong are the security of her nation. (Homeland was adapted by Gansa and co-creator Howard Gordon from the hit 2010 Israeli show Hatufim/Prisoners of War.) Hence we might say that one of the fundamental issues of modernist aesthetics – the question of the clarity, reliability and source of meaning is taken up here as specific issue about the gap between inner truth and outer expression. What is the psychological, political and social meaning of a gesture or look or mood or face? This show therefore seems to be thinking about what I take to be a central problem in Western modern life which is the matching up or congruence between the inner and the outer, between internal thoughts, intentions and motivations and their expression or concealment by the face and body.

As with Claire, it is by no means certain that Brody himself knows for sure how to match up his inner and outer. We are repeatedly given privileged insight via flashbacks into his memories of captivity – the torture, his resilience and, in a wonderfully eloquent series of ‘surprise’ reversals, gestures and emblems of care and worship. These are issues that go beyond, it seems to me, the compelling patterns of enigma and revelation this puzzle show offers us. What are those ‘strings and pulleys’ that connect our flesh with our minds and how do we use them to nurture and express or break and destroy the bonds of family and community and nation? What is it that moves us?